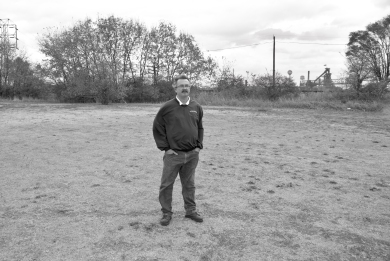 Former site of Oneida Elementary School. The school was demolished after the questionable effects of the neighboring mill on the students’ health.

Former site of Middletown Hospital. The new hospital was built in a nearby town. 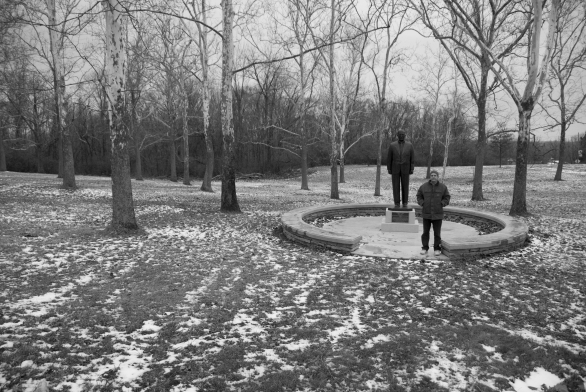 George M. Verity, Armco Steel’s founder. The statue was relocated here after the company’s headquarters moved out of town.

Dying Breed is a collaborative portrait project in Middletown, Ohio, artist Maggie Lawson’s hometown. All subjects are current or former employee’s of the town’s most important business, AK Steel. Some of the subjects worked for the company for over 30 years.

Three generations of Maggie’s family worked in the  steel industry, beginning with her great-grandparents who migrated from Kentucky’s Appalachian Mountains to work in Middletown’s mills.

The portraits aim to express something about the subjects as much as they are reflections on the present day relationship of Middletown to AK Steel.  Middletown has been impacted by serious economic decline since 2007 when the company’s primary union workers were locked out of AK’s facilities for one year during contract negotiations.

Participants each did a 45 minute to 1 hour interview about the changes they saw at AK Steel and Middletown.

Eric was one of the most politically involved subjects and a historian of Middletown and is followed on Facebook by many of the town’s present and past residents. I asked him to share his experience participating in the project. Eric stated, “Growing up in the one mill steel town of Middletown, Ohio, I never thought of myself as a “product” of a steel town. None of my family members worked at the mill. From an early age I knew I would leave that town, and believed that I was just passing through! However, during my childhood there in the 1960s I was shaped by the presence of ARMCO Steel. After serving in the Navy with service in Grenada and Beirut in the early 1980s, many years at Miami University, a few years teaching, a career as a crane operator in nuke plants, oil refineries, and steel mills, and living in several other industrial steel towns I found myself visiting Middletown more frequently. Maggie Lawson’s “Dying Breed” project made me realize that denying the influences of growing up in a steel town is like trying to deny my own DNA. It’s not always pretty, at times ugly, but it’s all a part of who I am…as uncomfortable as I am with that, it’s the truth and the truth is always beautiful. Maggie Lawson’s ‘Dying Breed’ project accurately captures that beauty.”     Eric